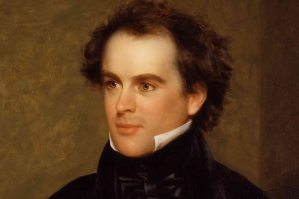 The mid nineteenth-century writer, Nathaniel Hawthorne, composed many stories concerned with moral issues.  One particular short story that rises to the dignity of a parable is called, Young Goodman Brown.  The story begins with Goodman saying farewell to his beautiful and angelic wife of three months, Faith.  Her name is an important detail.  Apparently, Goodman must depart for one night on some mysterious deed that bears a degree of danger.  After leaving behind his beloved and their home in the village of Salem, Massachusetts, Goodman enters a dark forest in search of his unmentionable destination.  Although Hawthorne is slow to reveal its nature, it appears to be some sort of meeting in a field, and of an impious type.  Along the way, Goodman meets a man carrying a black snake-like staff who becomes his guide.  As one person after another appears along the same wooded way, and he meanwhile reflects more gravely on the nature of his deed, Goodman finds his resolve shaken and he begins to argue with his companion.  First he sees the pious woman who taught him the catechism.  Then he sees the minister, the deacon, and other highly regarded town elders as well.  It seems as if everyone that Goodman respects is attending the same shrouded affair.

When Goodman finally arrives, he finds a woodland gathering of Satan worshippers preparing to welcome and initiate several newcomers – among them, Goodman himself and his beloved wife, Faith!  Goodman appears to have been persuaded against his will to attend this meeting, and offers resistance, but in vain.  Regardless, he and Faith are carried through the ceremony until the moment of actual initiation.  As the two are about to be unwillingly baptized from a rock-hewn basin seemingly containing blood, Goodman shouts to his beloved, “Faith, Faith, look up to heaven and resist the wicked one!”

Immediately, Goodman awakens alone in the forest.  Hawthorne deliberately leaves the reader without an explanation.  Did the meeting really happen, or was it only a dream?  Was Faith received into that wicked congregation, to which all the other venerable towns folk belonged?  Was he, Goodman, received?   Hawthorne offers no clues to answer these tantalizing questions.  But the conclusion of the story finds Goodman wandering again through the streets of Salem with a very different view of its citizens – the catechist, the minister, the deacon, the elders, and even his once precious Faith herself.  Disgusted with their (supposed) extreme hypocrisy – the holy do-gooders who may actually be devil worshippers – Goodman withdraws from everyone and everything, including the Church, and dies a bitter and lonely old man.  He could no longer believe in the good, simply because others had betrayed it.  And even worse, these traitors maintained the veneer of virtue for the purpose of preserving their good reputations.

Oh, the parallels!  The Gospel reading for the Sixteenth Sunday in Ordinary Time recounts our Lord’s Parable of the Wheat and Weeds.  It is found in the thirteenth chapter of Saint Matthew, which contains a total of seven parables specifically about the Kingdom of Heaven.  This Kingdom is neither this world in general nor heaven itself.  Rather, it is the Church in her infant and most imperfect stage.  Jesus said,

“The kingdom of heaven is like a man who sowed good seed in his field; but while men were asleep, his enemy came and sowed weeds among the wheat, and went away.”

The fundamental point of this parable is not to state the obvious, that there will be evil – metaphorical “weeds” – in the world; rather, it is to warn the faithful that there will be evil in the Church.  Although the field represents the world in general, the all-important detail is that the weeds are wrapped around the wheat and look just like it.  They are in the immediate vicinity of the wheat and cannot be distinguished from it.  In other words, this is a parable, not about the Church in the world, but about the world in the Church.  Hence, it would be too risky to pull up the weeds, because the wheat would come up with them.  The only solution will come with the harvest at the end of the season, when everything will be pulled up at the same time.  Then the weeds will be thrown into a fire, and the wheat saved.

Our Lord actually gives such an interpretation at verses 40-43:

“Therefore, just as the weeds are gathered up and burnt with fire, so will it be at the end of the world.  The Son of Man will send forth his angles, and they will gather out of His kingdom all scandals and those who work iniquity, and cast them into the furnace of fire, where there will be the weeping and the gnashing of teeth.  Then the just will shine forth like the sun in the kingdom of their Father.”

What will be found within the Kingdom of God?  Scandals and iniquity.  This cannot be heaven proper, for nothing unclean can enter heaven.  It is the Kingdom in its first and most imperfect stage – the Church on earth.  And what will become of such sinners and unbelievers who are ostensibly in the Kingdom but not truly of the Kingdom?  In the end, they will be thrown into hell.  Only then, after the Day of Judgment, will the Church be perfected and free of all evil.  For now, the Church must always be striving to reform herself, but with the understanding that only God can achieve a perfect pruning.  Until that Day of days, the weeds will remain, threatening the Church, soiling her reputation, and obscuring her message and mission.

Jesus used other images to express the same teaching – the dragnet that contains both good and bad fish, the man at the wedding feast who neglected to wear the proper garment, and so on.  The message for the faithful of all eras is the same: prepare yourselves, for there will be extreme evil within the Church.  And when you witness it, do not doubt that this most imperfect institution is, in fact, the true Church, the one Kingdom of God founded by Christ that will never be forgotten by Him.

The parabolic value of the story of Young Goodman Brown is seen in the final paragraphs, in Goodman’s reaction to evil within the persons that he formerly respected, that he thought had merited his respect.  Overreacting, he withdrew from Salem’s religious and civil institutions because he believed their members were hypocrites.  He judged the Church exclusively by her human face.  However, behind an all-too human exterior lies her divine interior, and to abandon one is to abandon the other.  Goodman tragically overlooked this fact, and in doing so, he committed a blunder committed by many people today.

As has always been the case since the betrayal of Judas Iscariot, there is extreme evil within the Catholic Church.  Presently, evil is being welcomed, defended, and promoted even at the highest levels.  At the same time, good is being ridiculed, denied, and opposed, even at the highest levels.  I guess we’re right on schedule; it’s just as our Lord had warned.  But how will we react?  Will we leave the Church?  Will we throw up our arms in despair, conclude that Christ has abandoned His bride, and never again darken her vestibules?  Only a Goodman Brown would do such a thing.

Countless Catholics respond to Church scandals and corruption by leaving her once and for all.  As if the sins of the clergy could alter the fact that every human being needs for salvation precisely what the Church provides; namely, the truth and grace of Jesus Christ.

Christ forewarned us about the coming scandals within His Church for a good reason; namely, so that when they appeared in all of their horrid grotesqueness – both the heresy and the perversity – we would not then wrongly conclude that the divine was wholly absent, that the God who had solemnly promised to remain with His Church until the consummation of this world, had, after all, abandoned her to the devil.  And also, so that we would not doubt that, in spite of hypocrisy and duplicity, the Church is still the Kingdom of God on earth.

Young Goodman Brown made a foolish assessment; it was purely emotional and therefore irrational.  As a result, he followed for the remainder of his life a different and longer path that, nevertheless, led him back to that same sylvan congregation of occultists.  Just as they had turned from God, so, too, did he, though in a vastly different manner.  And in the end, they would all arrive at the same kingdom where there is only “the weeping and the gnashing of teeth”.

The same is true for those Catholics who, overreacting to scandals within the Church, and even using such evil as a convenient justification, abandon the Church and never again return, to the peril of their own salvation.  For what, morally speaking, is the difference between the person who remains in the Church and sins, and the person who leaves the Church because of the sins of others?  Both have fallen and placed themselves apart from the Kingdom of God.

“Whoever, therefore, knowing that the Catholic Church was made necessary by Christ, would refuse to enter or to remain in it, could not be saved.”

– From the Dogmatic Constitution on the Church (Lumen Gentium) of the Second Vatican Council, #14